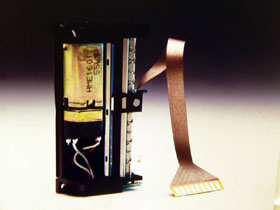 Our knowledge with military products is extensive, producing sonar buoys used as submarine detection units, a particularly difficult product, requiring complex tooling as the conductive material was being used in a rectangle patch arrangement around a circumference of the device to increase the potential of the sonar.

Not only was the coating challenging to apply but also it had to adhere to polythene, they also had to be put through accelerated ageing, before we could test , this was due to the storage location of the device and the expected life, interestingly this ageing process improved the coatings performance.

RF Solutions have processed parts for the British Army, Navy and RAF and have also produced critical parts for the US Military and Norwegian Army, via our customers either moulders or OEM’s.

The ribbon cable pictured, used within an operations vehicle, was produced for the “MOD Tempest project” and had to be coated not only to have excellent shielding properties but had to be extremely flexible and not be degraded by the movement of the ribbon.

Roper Finishing Solutions Ltd. is a privately owned company with a highly experienced and motivated management and production team, that specialises in the application... Read more »